Things I have been up to/thinking in no particular order, as I do not have faith in my memory allowing me to construct such a narrative.

–       Kede whisked myself, and my two co-workers, away to Tianjin for a nice summery Saturday outing. Tianjin is the largest Northern China coastal city located about 2.5 hours away from Beijing, and is the fourth biggest urban sprawled city in China overall. As we approached Tianjin, we skirted along the edges of its borders, sticking to the desolate wasteland views of grey stone gravel and grass that gave a bleak imitation of natural five o’clock shadow. With no warning (there is never any warning in China) the gravel turned into fluorescently hued plastic trees, and the tip of a sickly sweet pink spire emerged from behind a mound of dirt. We had arrived at the day’s entertainment: Binhai Aircraft Park. Our waiban Kevin procured tickets for us that showed, of all things, a Russian Kiev aircraft carrier printed on it. China is well known for slapping pictures of completely unrelated things onto any merchandisable real estate, and I saw the picture of this large ship as just another gimmicky ploy to guide you into ultimate disappointment.

There was legitimately a de-commissioned Russian aircraft carrier floating near the back of the park. We were allowed to shimmy through the tight internal spaces and go up onto the main deck where some old Hawks, and one helicopter, were parked up, as well as missile launchers and other maritime warfare paraphernalia (the phone booths tacked onto the starboard side I feel were a somewhat more modern addition).

The only problem we encountered on that day was, after arriving to the gates at about 10.30am, Sarah and I wanted to combat the relentless heat with some hydration. Finding the only open supermarket on the main strip, we entered through its doors to be met with enough beer to satisfy Homer Simpson, but not a drop of H2O in sight. Being in an amusement park and only finding beer on the shelves was one of the most traumatically ridiculous world problems I have had to experience. We eventually bought some overpriced water at one of the park shows – an adrenaline pumping faux movie set with racy red RX8’s and stunt bikes galore.

Tianjin also has this black market where you can buy everything, and I mean everything, with almost no questions asked (the only questions you will be hounded with are in due part to the haggling nature of Chinese markets, not the legalities of purchasing said items).

–             I FINALLY TRIED VIETNAMESE COFFEE. And I know what you’re thinking, ‘it’s not Vietnamese coffee if you’re in China,’ oh but it certainly was Vietnamese coffee my friends, for everything the light touched had been imported from the original source. The Pho Laboratory has only been open for two weeks, but I dare say they better prepare for an onslaught of hyped up Beijing residents needing their caffeine fix. I ordered my coffee prepared as a hot drink, even though just a mere sliver of window separated me from a blazing 34 degree day, because hot is the traditional method. The black ambrosia dripped slowly into my cup, swirling the creamy condensed milk layer into a luscious Rorschach test I couldn’t wait to consume. Once the last drop had escaped its brewed confines, I sipped on this heavenly brownie-noted liquid for almost an hour (I was in denial over finishing it with every half sip I took). The owner of the Vietnamese place warned me that it was quite a strong drink, and for most of my time I laughed internally at his preposterous sentence. It wasn’t until I finished the last two tiny sips that I became fully aware of my heart racing at a relentless pace. And to think I was going to order another one …

–       the Beijinger have said that they will take me back next year which I am hugely excited for. The managing editor has said he will encourage me to expand out of the dining realm and into feature suggestions, which is an amazing step up in regards to learning about the foreign media processes in Beijing. I was asked to attend a Sino-French celebration of diplomatic relations at Yishu8, an art gallery, you can read about that here. Other works I have finished recently are listed here. Oh and the Beijinger held their annual Reader Bar & Club Awards with all-you-can-eat-and-drink on offer for four hours. I acquired a bright blue feather boa over the course of the afternoon, so you can figure out how my night went.

–       I’m going to try something different and post photos now. 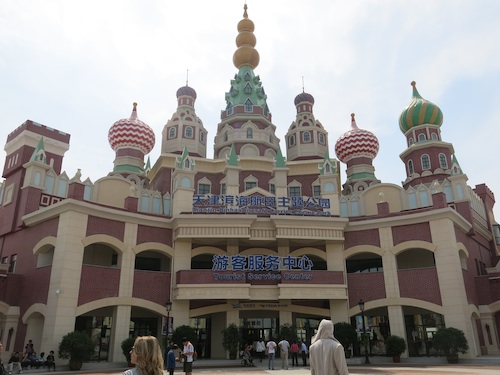 Entrance to the Disney-on-heroin park

They see me rollin’

Boats and planes and missiles OH MY